YOU CAN PLAN A PRODUCTIVE DAY ON ONE SHEET OF PAPER.

This sheet of paper is called The Daily Driver. And I want you to have it.

Trip Adler is a Harvard graduate who was accepted to Y Combinator with the idea for a ridesharing app. But Trip Adler isn’t the founder of Uber.

What happens when someone smart, who has a good idea, meets with a team of experienced advisors and they collectively whiff on an idea like Uber? In this case, the problem was bad timing.

Adler had his idea three years before Uber, but it was simply too early. What do you do if you’ve got a great idea, but you’re too early with it? In Adler’s case, he spent his Y Combinator money and time iterating, failing, and experimenting with a bunch of ideas. Then, he founded Scribd.

Adler continued to experiment until he found something that worked. Experimentation is valuable for both Silicon Valley startups and our own lives. I left my phone in my pocket and it worked out great.

I actually get more work done when I don’t use small snippets of time to catch up on Twitter, read articles, or check email. And keep in mind that any experimentation works, whether it’s to try GTD or something else.

In high school, I used the calendar the guidance counselor gave to all the students. I liked it most of all because it was free. When I got to college I got a Palm Pilot because, well, it looked cool. Add in the productivity, task, and note apps I’ve tried on my phone and you’ve got a long list. That Palm Pilot was a waste of money. Those apps were a waste of time. But those are the small costs that can lead to big results.

None of have stuck digital apps have stuck, but I’m committed to experimentation because that’s how you find good ideas — like notecards. 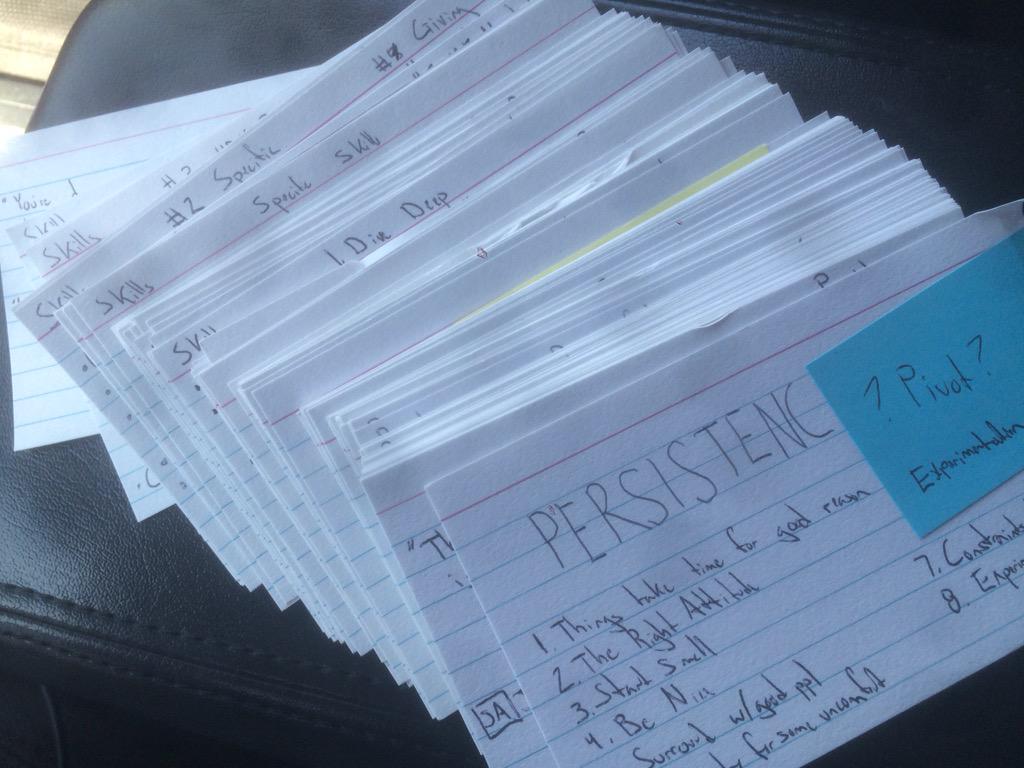 I’m currently writing a book about the themes of success and didn’t know how to organize it. My first attempt was with Ryan Holiday’s notecard system, which works like this: write down anything you might include on a notecard. From single words to big ideas – everything gets a notecard.  Then, arrange the notecards and write. It’s that simple.

And it worked. It made the actual writing seem almost too easy. I logged 15,000 words over the course of four sessions, which is well beyond my normal pace. It went so quickly because I didn’t need to think about the macro, just the micro. This ease doesn’t mean my book will be good. That depends on what I wrote down in the first place. It is  just well organized.

That it worked so well surprised me. I’ve been a regular user of Evernote and thought that when I left that high school planner behind and moved on to a Palm Pilot, I would never go back from digital. Instead I found out that the physical notecards were better for me.

Sometimes what we need to try our own experiment is an idea from someone else. It could be at home or at work. It could be personal or professional. It could reshape your company or just your morning routine. The important thing is to experiment and see how it works. What will you experiment with today?